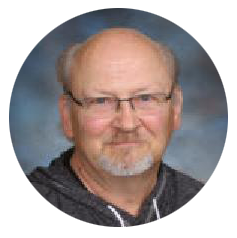 This month we are featuring Bruce Link, CDM, CFPP, of the WI ANFP chapter. Bruce first joined ANFP in 1994. He began his volunteer career with the WY ANFP chapter after he was asked to host a state conference. Bruce was in Wyoming for 25 years before returning to Wisconsin about two and half years ago. However, before relocating to Wisconsin, Wyoming asked him to continue as their newsletter editor. When retuning to Wisconsin and becoming active with the chapter, he was asked to serve as their newsletter editor as well. He is still serving in both roles as of today. The newsletter editor position was the first of many volunteer positions Bruce has held. He has also served as the chapter president (WY, two terms), treasurer, spokesperson, and webmaster. In addition to his volunteer roles with the chapters, Bruce served on the National Board of Directors as a Director at Large (2005-2007), government affairs committee, and was also a participant in the Leadership Institute.

During his volunteer career, Bruce spearheaded many projects, including the introduction of the President’s Welcome Reception at chapter meetings, led the chapter to two state achievement awards (2002 and 2003), designed chapter apparel, and helped to implement parliamentary procedure within the chapter. This was in addition to his unyielding encouragement, enthusiasm, and support of the chapter, its members, and students.

Additionally, Bruce was able to visit five state chapters (twice) during his time as Director at Large, which the members appreciated. He also led an ambitious initiative with then state president, Felicia Smith, during 2017 Pride in Food Service Week (PIFSW). Bruce and Felicia took a state tour where they had the opportunity to meet prospective members, current members, and administrators to get the word out about ANFP and the credential. During their tour they also made TV and radio appearances to promote ANFP and PIFSW.

Bruce also made major improvements to the state newsletters, both for WY and WI. During his tenure as newsletter editor, he made the communication a monthly reoccurrence, rather than a quarterly publication. This gave members better, more up to date notice of events and conferences. He also distributed the newsletter to administrators and vendors to keep them informed of news and events with the chapters.

As for now, Bruce would like to see chapter membership expand as well as continue to build relationships with vendors and other industry stakeholders, by means of an Industry Advisory Council.

Bruce believes volunteering provides one of the greatest rewards a person can receive. Volunteering generally has no financial gain, however, the friendships, contacts, and benefits gained through volunteering are priceless.

Thank you, Bruce, for your steadfast support, continuous hard work and dedication to both the WY and WI chapters as well as ANFP! It is volunteers like you that make ANFP the success it is!

If you would like to nominate yourself or another volunteer, please email Abigail Solazzo at asolazzo@ANFPonline.org.